What do you do, travel or eat? – The most original bus trends!

If you are among those who are always looking for new and odd experiences… we might have something for you! Buses reinvent themselves, they take on a new robe and don’t continue to be only means of transport, but become also place to have a break, a dinner, where spend the spare time such as bar, ice-cream parlors, restaurants and other ideas related to food and entertainment.

It was in the year 2011 that in London, the buses’ capital with its red double decker bus, was born the new BUS RESTAURANTconcept. The Big Red Bus Pizza in Deptford, the first opened, and The Crust Conductor, the most popular and renowned, offer London’s customers the chance to enjoy a pizza made with a wood-burning oven in an exceptional location.

A trend that wasn’t limited to the English capital, but which immediately become established around the world. The next year was the turn of Canada where a man named Aleah decided to rebuild a vintage double-decker bus found in a dump, transforming it into the Wild Thyme Coffee House: a great cafe for lunches and delicious snacks. And it doesn’t end here… The Irish, inspired by their tradition of beer masters, have adapted this idea to their culture, giving life to the PUB-BUS.

And in Italy? Actually, even in Italy we have a similar example of public transportation that represents the soul of a restaurant. In Milan, the ATM (Milan Transport Company) has remodeled old carriages of 1928, in order to create a wagon-restaurant in the city center, where enjoying refined dishes of the Milanese tradition, delighted by a continually moving panorama! 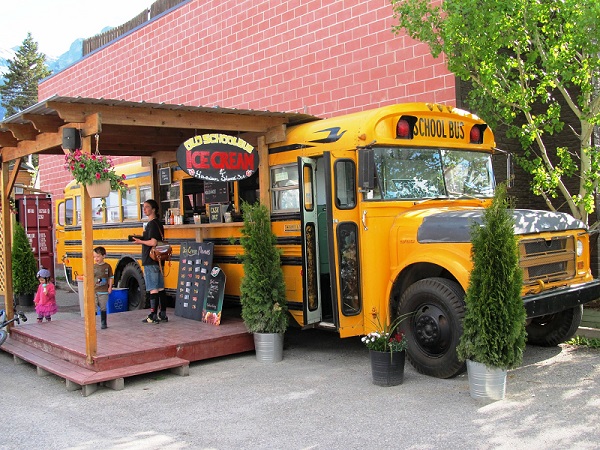