China: a Straddling Bus to solve air pollution and traffic

An elevated bus, with rails to the extremes of the road, which allows cars to move under its passenger cabins. This would be the bus of future, which is going to become reality. Invented by a Chinese engineer, Song Youzhou, who presents it as “the turning point” of the road networks to solve in a quick, ecological and cheap way the problem of the collective urban transport in the Chinese cities.

This big bus, called TEB (Elevated Transit Bus), has a transport capacity equal to that of 40 buses and, in its favor, there would be also the cost and construction times shorter than those of an underground train. Furthermore, the collection of the energy required to make it work is ensured by the large surface of the rooftop, covered by solar panels, that brings the pollution rate to 0.

Presented at the Beijing exhibition “International High-Tech Expo”, the manufacturing company Explore Transit Bus has announced that the vehicle is under production and that the road testing will begin soon in the northern China. 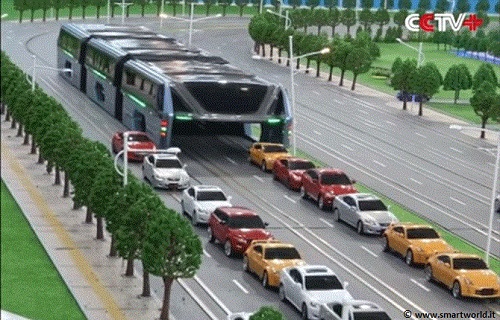